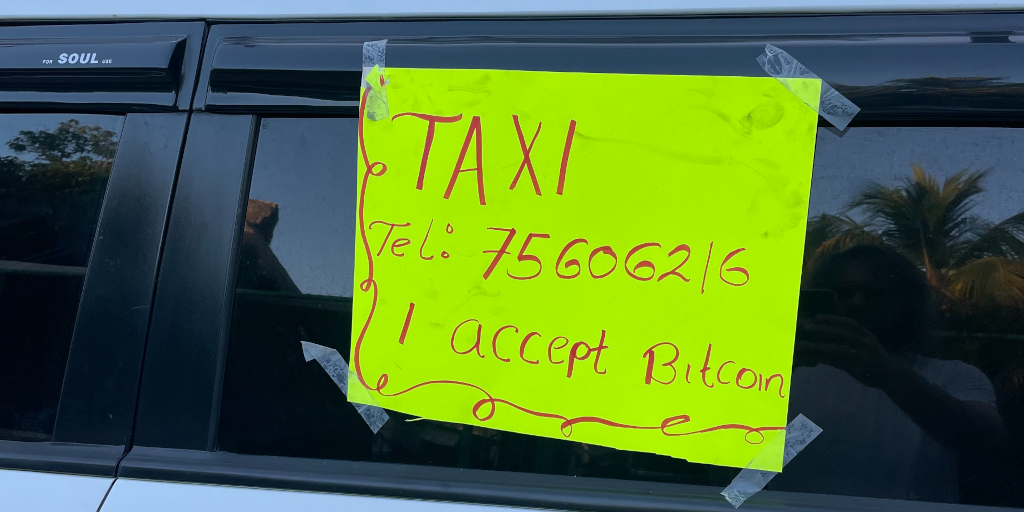 
Despite the bear market, this year was a great success for bitcoin. I have traveled to many countries to witness and celebrate bitcoin adoption. The last two major conferences of 2022 were Adopting Bitcoin in El Salvador and The Africa Bitcoin Conference in Accra, Ghana. I was fortunate to attend both.

Everyone, especially every bitcoiner in the world must visit El Salvador. It’s amazing to see bitcoin in the wild, everywhere you go. The country is thriving! From the minute we landed, we were even able to pay with Bitcoin at the airport while processing the travel visa.

This was my second year attending the conference. When we were there in 2021, we traveled an unpaved road in our rental car from the airport to San Salvador. This year we took a brand new highway that was recently finished. Amazing progress was made in just one year and so much had improved. From newly added bike lanes to noticeably cleaner streets. You could smell the renewed sense of hope in the air.

El Salvador literally means the savior. How ironic that it is the first country to make bitcoin legal tender. I believe bitcoin is the savior of humanity. It was created to restore truth and put an end to the evils of the current global monetary system.

The second annual Adopting Bitcoin conference was a huge success. Workshops were in nearly every available conference room. So many bitcoin-only companies had a chance to present. From Machankura to Azteco, there was no lack of incredible founders and innovative companies. Chris Hunter, the co-founder of Galoy, opened with a keynote. He shared that many people continue to ask him which country would be next to make bitcoin legal tender. To which he answered that we, the bitcoiners, shouldn’t be asking for permission. We should continue to build and make bitcoin accessible to as many people as possible. We must continue to onboard businesses and promote bitcoin adoption worldwide. So when the time comes, we won’t need permission from the government. Instead, bitcoin will be so far spread that they’ll have no choice. When enough communities worldwide adopt the bitcoin standard and understand the value of sound money, we won’t need permission, we can simply ask for forgiveness.

President Bukele is doing an incredible job. Currently, he is the only orange-pilled President in the world, but he is also a leader who promotes law and order. Since taking office he has massively cleaned up the gang violence. There is still an old stigma that El Salvador is not safe to visit, but that is a blatant lie. El Salvador has never been safer. The recent stats are impressive, to say the least. Over 57,000 gang members were locked up and taken off the streets in the past year. Many locals shared that for the first time they were able to go home from work without the fear of being shaken down by the gangs. Locking up so many criminals has been extremely beneficial to the economy! I guess Max Kaiser was right, after all. Bitcoin promotes peace.

The two-day conference took place in San Salvador and was followed by a trip to Bitcoin Beach in El Zonte. We stayed there through the weekend and were able to pay with bitcoin everywhere we went. Bitcoin Beach is the place to be! I miss it already and can’t wait to go back.

Ghana was very different from El Salvador. This was a historic event as it was the very first African bitcoin conference! It was both a smashing success and an incredible time. However, I was shocked to learn the published inflation rate for Ghana was 40%! By the time I was writing this blog, their inflation rate jumped to 51%. So basically in three years or less, saving in fiat, their money is gone. Africa needs Bitcoin and this conference couldn’t be happening at a better time.

The event took place in Accra which is the capital of Ghana. Accra was a safe place to visit. In fact, that’s why the organizers chose Accra for the conference. No worries about walking late at night or any safety concerns at all. Also, unlike El Salvador, sadly almost no merchants accepted bitcoin. The only time I was able to pay with bitcoin was when I bought conference shirts from a merchant on-site.

It’s a major challenge for Africans to even buy bitcoin at all. With the exception of Bitnob, who had some amazing news of their Strike partnership, the Ghanaian people are hard-pressed to find easy stacking solutions. Clearly, Bitnob is in a pole position to be the super bitcoin app of Africa.

Another simple option that has a huge potential to be adopted by the African people is Azteco. Jack Dorsey mentioned them on stage and recently invested in the company. Their novel top-up voucher solution is very familiar to Africans who essentially live on top-ups. I saw this firsthand at the mobile money stands and cell phone vendors. If Azteco can be first in Africa it could spread like wildfire and there will likely never be a large, clunky, expensive bitcoin ATM on the continent.

I was able to orange pill a few local merchants when we went souvenir shopping at the market. Even though we didn’t end up paying with bitcoin, I had three merchants download a Wallet of Satoshi and sent them a few thousand sats. The guys couldn’t be happier. They asked all the right questions and were eager to learn more. I am pretty sure we convinced them to go down the rabbit hole. I only wish I had brought a few books with me, or I could’ve just printed a few copies of the white paper. Ghanaians are incentivized to understand bitcoin out of necessity. It was so natural for them to grasp the promise of bitcoin.

Africa is known for leapfrogging technology. They leapfrogged landline phones and went straight to mobile. It’s possible they leapfrog bitcoin ATMs and adopt Azteco vouchers, or for those with smartphones, Bitnob. A large population of Africa uses the old school feature phones and this is where Machankura is leading innovation. The USSD mobile system is how Africans pay for many aspects of their life. Machankura has solved using bitcoin via feature phones and it is super cool to see.

To sum it up, there are a ton of people in Africa and bitcoin is the tool that can preserve their wealth. They need bitcoin more than ever and as we like to say it, slowly then suddenly… It’s happening.

I strongly believe we can witness a massive power flip in our lifetime. Many emerging continents like Africa and South America will adopt bitcoin and outgrow their former colonizers. I know it’s possible. Go bitcoin!

Even though Satsback.com has many global partners, we have not onboarded El Salvador or Africa just yet. We are looking to find ways to bring bitcoin rewards to many emerging countries. Until then, we are happy to celebrate and recognize all the amazing bitcoin companies that are doing Satoshi’s work.